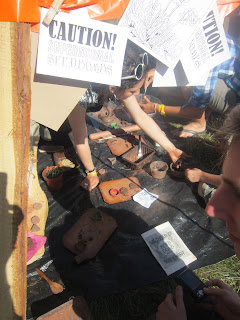 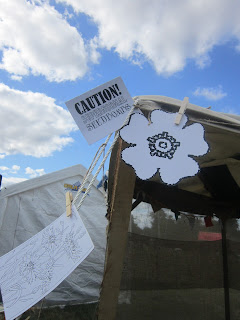 It was a great opportunity to deliver the Wildflower Seed bomb Workshop within the context of the SUPERNORMAL festival / experimental site where the focus remains ''firmly rooted in art, environment and pushing boundaries, and embracing difference whilst celebrating common cause.''
SUPERNORMAL is a three day, experimental arts and music festival at Braziers Park in Oxfordshire organised on a collective basis by artists and musicians and offering a platform for artists, performers and musicians to work collaboratively and creatively for a new kind of audience.

The workshop brought together young and old alike and we talked about our own gardens, wild spaces, allotments (and growing efforts) and wastelands and how we can improve them (using the SUPERNORMAL seedbomb as a starting point!) whilst mixing the seedbombs. 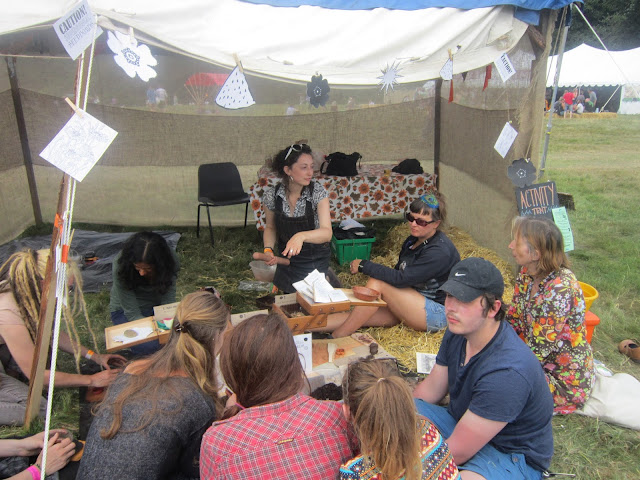 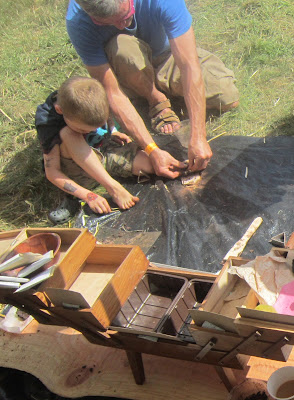 The Braziers Park site and the areas surrounding the communal house had some inspiring growing sites with an organic kitchen garden and orchard. The Braziers’ estate is now being managed so the wide diversity of habitats can be preserved and enhanced.

As part of the Government’s Countryside Stewardship Scheme hedge planting and maintenance, tree planting, both for landscape enhancement and to provide woodland for coppicing, and meadow management have all been happening on the site for 10 years, and much of the work involved so far has been undertaken by volunteers.

The site was teeming with Honey bees which was fantastic to see, although we hoped that the seedbombs may offer some wild flowers to attract them as an alternative to Cider!

The booklets which were produced for reference alongside the workshops were at hand to answer people’s questions about the non-invasive UK seed varieties in each mix, soil types and growing conditions, alongside a small library of books relating to wildflower species and urban growing.

Kids and adults also had the chance to design a wrapper to take the seedbomb home in, which could include a message about where the seedbomb would be planted and why…

An ad-hoc seed swap began when Rob, from the SUPERNORMAL team, brought along a collection of seeds to swap for wild flower seeds and seedbomb mix, which sparked conversation and an idea to bring a plant and seed swap to SUPERNORMAL next year- Watch this space…

We would like to thank SUPERNORMAL for having us there and for all who came along to the workshop with enthusiasm to chat, make seedbombs and scatter wild flowers on-site or those who took theirs away with a specific location in mind. The Honey bees on site will appreciate the wildflowers we seedbombed the site with!!
Posted by Kate lynch at 06:19