I attended a research & development opportunity for ‘developing small encounters’  Tuesday 8th-Friday 11th May, which cumulated with a sharing event on the Friday evening, where we had the opportunity to show our work in progress to an audience of invited participants. The R&D week was run by the ‘Small Encounters Collective’ with mentoring & facilitation from Artist Adrian Howells.

I was approaching the small encounters R&D week as an artist; many others involved were from a performance/drama/ theatre background, which allowed me to gain insight into areas of performance. Adrian shared his work in an Artists’ talk, to give a background to his practice and areas of expertise in one-to-one performance. I was drawn to notions of ‘ genuine exchange’ reconnecting & the emphasis of physical encounters in opposition to the social networking phenomena explored in his work- themes that I am currently exploring with the ‘unstructured material’ concept. I became interested in developing skill sharing & exchange as a ‘small encounter’ performance.

Some of the themes from Adrian’s Artist talk that inspired the development of my own piece throughout the week:

-The quality of exchange- quality time with another individual and how that can benefit us (well-being).
-Notion of ‘co-authoring’ an experience
-Creation of domestic spaces or sites promoting comfort
-Focussing on ‘real time’ & real people (as opposed to ‘cyberspace’, internet alter-egos)

My favourite piece of Adrian’s work is the ‘Garden of Adrian’ – this piece reminds me of the potential of my allotment space and the various experiences I have whilst I am there (creative, personal, transformative & sensory experiences, for example)

The week was busy, but well- balanced. Adrian’s talks & mentoring allowed us to gain insight into working with one- to -one performance, and the issues that arise in doing so. Adrian’s facilitated activities consisted of an outdoor ‘5 senses meditation’- which made us all stop &  simply touch, smell, taste & listen for an hour in the park, and working on one-to-ones within the group- sharing memories, exploring the senses &  sharing ideas with one another in intimate moments- or ‘small encounters’. I valued these experiences and they made me feel that we should all be able to take time out within our busy days to reconnect with the environment & those around us, but more importantly with ourselves. The rest of the time was allocated to the production of our own ‘small encounter’ performance.

The working title of the piece I explored and delivered during the R&D week was ’UNSTRUCTURED ENCOUNTER: the nature of creativity'.

We were to work within experimental ‘portable tent -like structures’. I had brought along the top part of a garden greenhouse to create a frame which I intended to build around with felts, collected material & William Morris fabrics & tent coverings, referencing nomadic structures such as yurts. 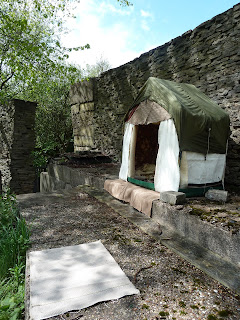 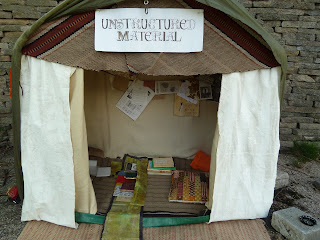 I am interested in exploring ways of transferring knowledge through direct contact/exchange with individuals- as social skills have rapidly been lost with the rise of social networking. I therefore aimed to create a space that would act as an open studio- within the context of research & development, aimed to invite audience participants in to share with them my current research & inspiration one-to-one, and to encourage conversation about creativity & what constitutes creative activity, I was also interested to see if any recurring themes emerged amongst the visitors to the tent. 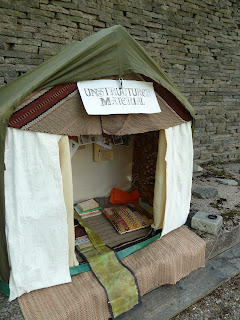 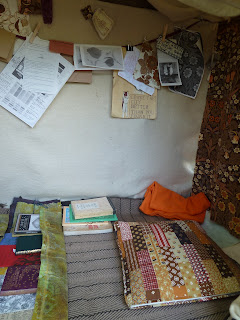 I chose to work outdoors in the ‘arena’ area. We had a site visit on the Wednesday, and I was immediately drawn to the outdoor space. Whilst on the site recce, I was seeing potential resources in this area everywhere- 2 big lime trees, a nettle patch, and a comfrey patch. Initially I thought this would be a great opportunity to share some of my forging knowledge and offer individuals the chance to forage and taste with me as a ‘small encounter’, emphasising that we can still be self-sufficient and surrounded by an abundant of natural resources and edibles within the city environment. However, shortly after this idea came into fruition we were advised not to go on the grass as the area had been sprayed with weed killer. This was disappointing, but brought up interesting conversations about careful picking within city environment, I also thought this demonstrated how organisations are missing a trick- I suggested that these weeds they were trying to kill could be a source of income- freshly picked lime flower or nettle tea, could be served in the MAC café, for example (visitors could even be invited to pick their own).

In the Friday night performance event some of these issues were discussed from the contemplative vantage point of the tent, and two of the participants chose to add information on nettles and lime to ‘the book of Unstrucured Encounters’, as I shared with them how to pick prepare & use the plants. 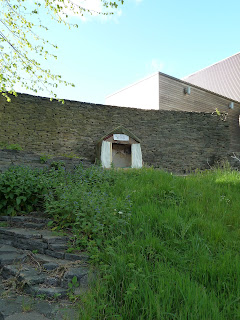 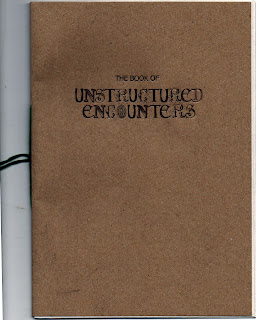 I offered a tracing exercise as a means of exchange; participants chose something within the tent to respond to, whether it was something they were drawn to visually, something they wanted to learn about, or a randomly selected sentence from a book. The tracing exercise allowed participants to trace over their selected text and then transfer the tracing into ‘the book of small encounters’; the activity of tracing and re-tracing acting to re-enforce or meditate on the chosen message. This quiet moment of ‘tracing’ allowed for conversations to arise about the chosen article. I then re-traced the participant’s tracing and transferred it onto a postcard. Offering them a fragment of information that they could use to start off their own research or simply act a reminder of the encounter. ‘The book of small encounters’ was created, a site-specific collective response that will act as a lasting document of the R&D.

Further development
The opportunity allowed me to experiment with the building of a portable structure that could become an on-going pop-up resource space, for a physical encounter with the ‘unstructured material’ research; a small space to exchange & skill swap, or simply talk about current issues. I could tour various places with this. I also want to experiment building more tent-like structures using natural materials (wooden frameworks). The size of the tent was just right for a one-to-one encounter and feedback from participants noted that a safe & comfortable environment was created; however, I feel that the bigger the tent the more sharing at once can take place. It would be interesting to experiment with different sized tents designed for varying numbers of people. I would also like to experiment with adorning the surface of the tents with information, slogans; patterns that would be applied by painting, therefore the decoration would become both informative & functional.

Thank you to the Small Encounters Collective & Adrian Howells for the opportunity and for their mentoring, advice & support throughout the week.